Solution of Catherine of Aragon's Cipher Letter to King Ferdinand

Back in 2018, I reported codebreaking of Catherine of Aragon's letter to King Ferdinand, her father from November 1509. It was achieved by Victor and Thomas Bosbach independently. At the time, I refrained from disclosing the solution because I had submitted it as a challenge to the public at MTC. Although my contact at MTC3 gave me an ok for publishing the results as early as 22 September 2020, I couldn't reconcile the two similar but different solutions to derive the best deciphered text. Now I publish the results, hoping that someone versed in Spanish completes the solution, and, better still, contextualizes the deciphered text.
See: Solution of Ciphertext of Catherine of Aragon to King Ferdinand (1509),
Posted by cryptiana at 7/13/2022 No comments:

A Batch of Solutions to Unsolved Historical Ciphers by George Lasry

I call for solutions for "Unsolved Historical Ciphers", to which I receive or find solutions from time to time. This time, I received solutions of no less than 10 ciphers from George Lasry, a computer scientist and expert in cryptanalysis, who has solved many historical ciphers (some of which I mentioned). (It seems his solver can readily solve any cipher mainly based on letter-by-letter substitution, even with many homophones.) I updated my records in related articles, and present all of his solutions in this batch in a new article, "Decipherment of Hitherto Unsolved Historical Ciphers (by George Lasry)".
Posted by cryptiana at 5/29/2022 No comments:

Books Entirely in Cipher or Shorthand

There are books entirely in cipher or shorthand (not fake ones as I reported before).
Charles Dickens' A Christmas Carol was printed in Gregg shorthand in 1918 by The Gregg Publishing Company (Internet Archive). (I learned of this in Elonka Dunin and Klaus Schmeh, Codebreaking, A Practical Guide (2020), p.352.) Except for the front matter and the running head, pages after pages are filled with text in shorthand. Judging from the publisher's name, this appears to have been made for promotion of the Gregg shorthand system.

This is about shorthand, not cipher. But there are also books entirely in cipher. Klaus Schmeh's List of Encrypted Books (Cipherbrain) lists more than a hundred such titles. Of these, nos. 00006 (1835; a couple of hundred pages; preserved in British Library, Shelfmark 4783.a.30) and 00007 (1850; 61 pages; preserved in British Library, Shelfmark 944.c.19) are the most interesting for me, because I'm more interested in publications than personal diaries.
The title page of No. 00006 reads as follows:


Apart from "London" and the year 1835, all is encrypted.
This is reported in an article titled "A Femail Conspiracy" in The Sydney Morning Herald, 23 April 1869, Page 6 (TROVE) and The Star (Christchurch), 16 June 1869, Page 3 (Papers Past). Both are the same article reprinted from the Pall Mall Gazette. It is not known whether there are other copies than the ones in the British Library.
A 19th-century philologist took interest in this, only to find it is English in cipher rather than any exotic language. The title reads:

Order of the Altar,
Ancient Mysteries
to which
Females were alone
admissible.
Being Part the First
of the
secrets preserved
in the
Association
of
Malden Unity and Attachment.

In February 2022, Charles Dickens' letter in shorthand was cracked (for about 60%) (The Dickens Code, Open Culture, The Dickens Project). It remained unsolved for over 150 years (called the Tavistock letter from the letterhead).
I thank D.P.J.A. Scheers, who authored "The Shorthand of Charles Dickens" (Academia.edu) last year, for attracting my attention to this. (He is credited as one of the contributors to the solution (Roll of Honour).) Although shorthand is different from a code/cipher, it is sometimes called as such (a famous example is Samuel Pepys' diary, mentioned in a previous post).

Dickens taught himself shorthand as a teenager. There were many shorthand systems, but what he picked was Gurney's Brachygraphy, one notoriously difficult to master. Struggles with shorthand are mentioned in the semi-autobiographical novel, David Copperfield (Ch. 38) (The Dickens Code). Moreover, Dickens adapted the system as he used it, which added difficulty in reading surviving texts in shorthand left by him.
The 60% solution (pdf) of the Tavistock letter was achieved by contributors around the world in response to a call by the Dickens code project. (Since 40% is still unread, there is still room to make contributions, though the contest is closed.)
There are eleven shorthand texts left by Dickens (Hugo Bowles, "Dickens's Shorthand Manuscripts", Dickens Quarterly, Johns Hopkins University Press, Volume 35, Number 1, March 2018 (Project MUSE). Bowles is a pioneer in this field and authored "Dickens's Shorthand Deciphered by Identifying 'Sydney Smith' Source Text", Notes and Queries 64.4 (2017): 614-17 (which I have not seen). Some unsolved shorthand texts are presented as challenges at The Dickens Code website. One is still open for a few more days! 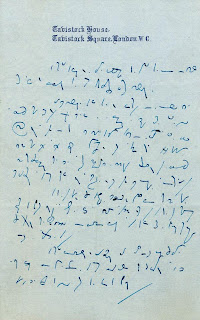 I reconstructed a cipher used in a letter from secretary Escovedo to Philip II dated Antwerp, 9 April 1577 (see here). Since the ciphertext is accompanied with an extract of the decipherment, there was little difficulty in the reconstruction. It is the same as the cipher solved by St. Aldegonde, printed in David Kahn's The Codebreakers, p.120. 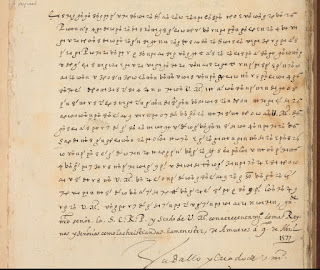 I don't presume to be a codebreaker, but I have done some codebreaking, as reported in "Unsolved Historical Ciphers". Admittedly, most of the ciphers I solved (as opposed to "deciphered" by using already deciphered materials or finding the key) are simple monoalphabetic ciphers. But when I took inventory of my codebreaking activities the other day, I found the following may be somewhat significant.
- Vatican ciphers (1593) with variable length symbols written continuously (see "Identifying Italian ciphers from continuous-figure ciphertexts (1593)" (Cryptologia))
- A Spanish letter to Emperor Charles V (1529) employing symbols with diacritics (see "Codebreaking of a Spanish Cipher with Vowel Indicators")
- Spanish letters from Philip II to ambassador Vargas Mexia in Paris (1578), which, together with three other keys I identified among known ciphers, may allow reading of a whole collection of undecipehred letters (see "Finding the Keys to Philip II's Cipher Letters to Juan de Vargas Mexia
")
Posted by cryptiana at 5/05/2022 No comments:

When I was browsing Vigenere's voluminous book, Traicté des chiffres (1586), in studying the history of reception of the Vigenere cipher some months ago (see here), I found illustration of Japanese characters in the appendx. Vigenere was the first to introduce Japanese syllabary (if not Japanese characters) to Europe. Although I soon found this is known, I described it in a new article, "Vigenere's Introduction of Japanese Characters in Europe".

This blog, maintained by S. Tomokiyo, reports updates in my cryptology website Cryptiana: Articles on Historical Cryptography (where my email address will be found at the bottom).
Unsolved problems (undeciphered cryptograms etc.) will also be presented to solicit information for further updates.